Thembe our male lion and his 2 female wife’s came close to the lodge and made a Wildebeest kill. This was exciting as we have not had a kill so close to the lodge in a long time. The night before they were spotted close to site 43 moving to the Eastern side.  We had great sightings this month. Thembe and the Dinokeng Male Lion were seen a few times chasing each other. Female lions are the primary hunter of the group. They are smaller and more agile than males but since their prey is still generally faster than them, they use teamwork to bring an animal down. Fanning out, they form a semi-circle, with the smaller, weaker lionesses herding the prey towards the centre. The stronger female knocks the animal down and make the kill. 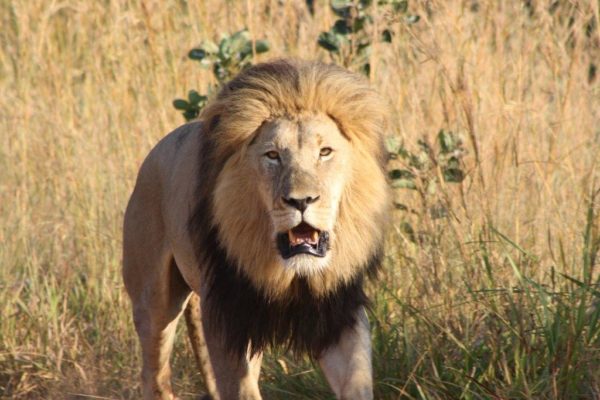 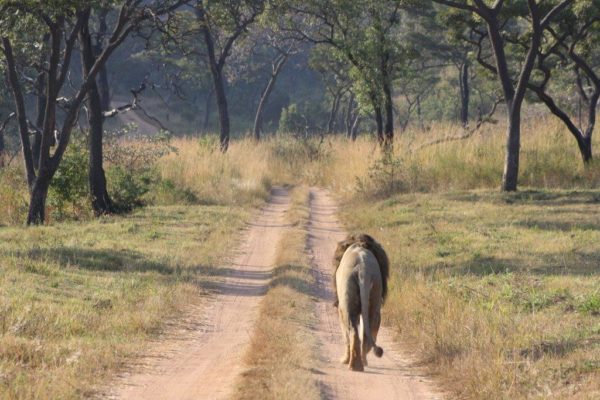 On an afternoon game drive we were lucky to follow a male Leopard across the road. It walked really slow and jumped in a tree. It was time for an afternoon nap. We could not believe our luck.  After having a relaxing sundowner one afternoon we got back into the game viewer. After just a few minutes of driving we saw a very young male leopard only 20 meters form the cruiser. After posing nicely for some photos, this rosette cat started walking along the ridge it was on, exploring every nook and cranny of the rocks and stopping to stretch. It lay down and watched us for a bit. A really good sighting. When it comes to hunting for food, these big cats know their stuff! When a leopard spots a potential meal, it approaches with legs bent and head low, so as not to be seen. It then stalks its prey carefully and quietly, until it is five to ten metres within range. The leopard dashes forward and takes down its victim with a bite to the throat or neck.

Buffalo sightings have been abundant this month. One old daggaboy has been in the Sterkstroom valley for the past week, obliging us by wandering down the road in front of our vehicle for close to half an hour. The valley is still thick with vegetation, despite the lack of rain in the area, a possible reason for this buffalo’s continual presence as they prefer thick vegetation as a habitat. Buffalo need a good fresh water supply as they love to cool down and also drink water daily. The bulls like to lie in water and mud hollows where they can roll in the mud and take mud baths to rid themselves of flies and ticks. 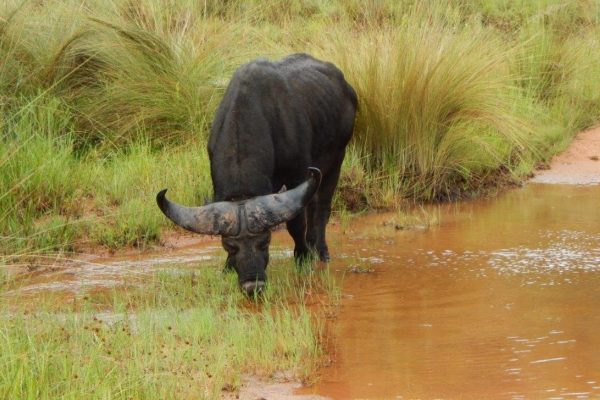 With winter just around the corner we are seeing a lot more Elephant around the lodge and in the Sterkstroom Valley. There is a big breeding herd around the Sterkstroom valley currently and every afternoon for the past week we have spotted them. It has made it a little bit easier for us to get great elephant sighting for a change without driving too far from home, which also allows us to spend more time in a sighting and enjoy it. We had about 20 elephants just yesterday having a ball in a big mud bath next to broken bridge, the moms sometimes having more fun than the kids! We spent about 45 minutes with them, which was the highlight of the whole day. These magnificent mammals spend between 12 – 18 hours eating. 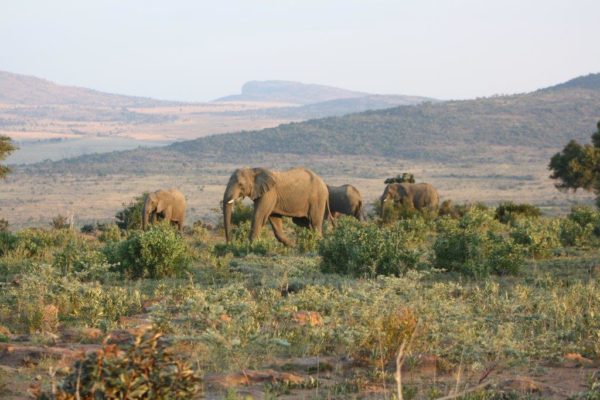 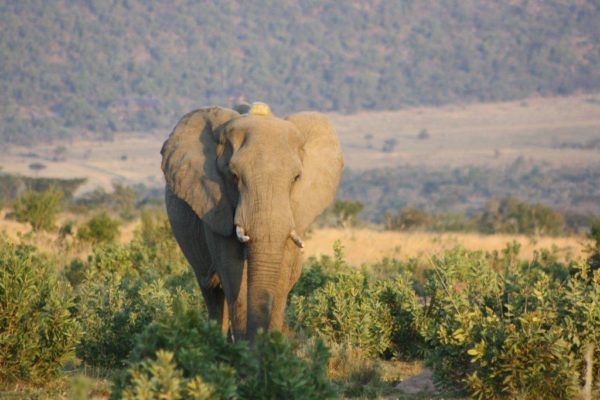 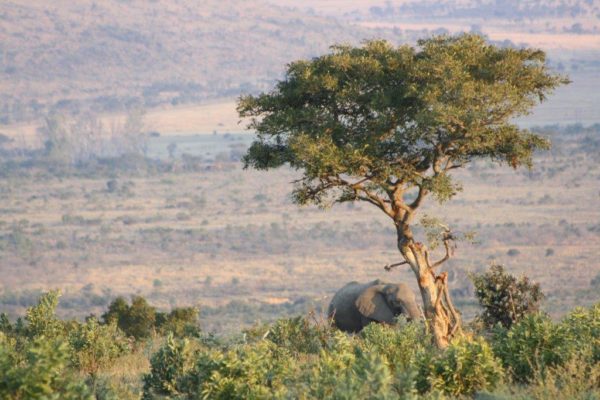 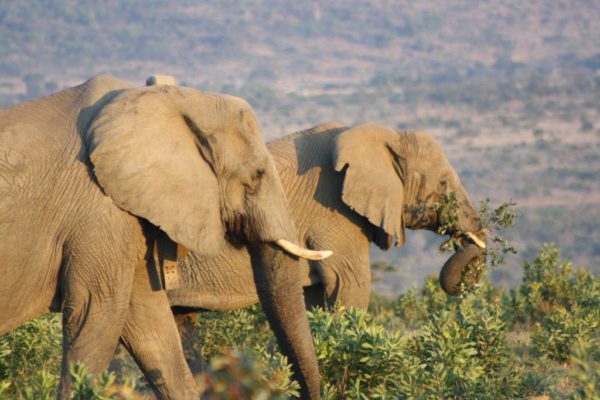 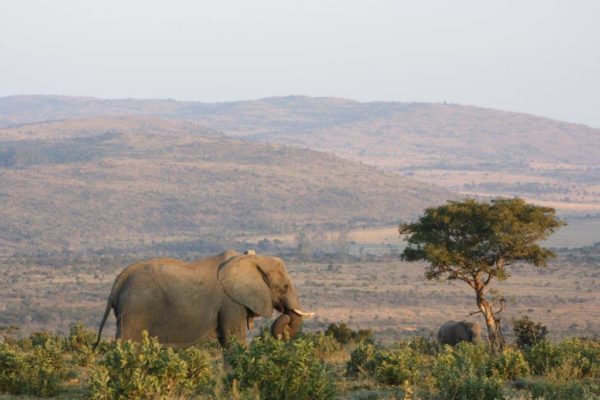 This month provided the opportunity for two separate cheetah sightings, one in the South of the park and the other near the Western airstrip. We were lucky enough to join a sighting of a male which made a zebra kill. He was fairly close to the road and we were able to watch him for the better part of half an hour. Suddenly, he became very alert and a few minutes later a station called over the radio that one of the male lions on the reserve was heading up the road in our direction. The cheetah spent a few more minutes on the kill and then moved off as the lion began calling, rather than run the risk of being in the area and facing a confrontation. Cheetahs are extremely fast however they tire quickly and can only keep up their top speed for a few minutes before they are too tired to continue.  We had a sighting where the 3 cubs played like kids. It was adorable to see them play. 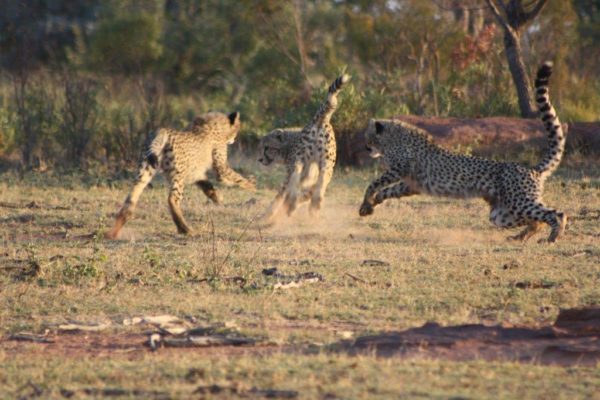 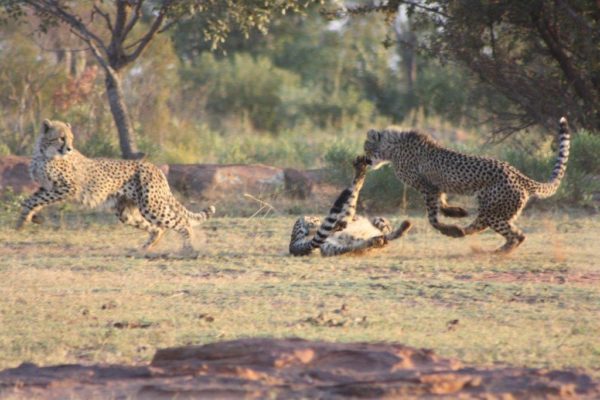 We had 2 lonely bulls that visited us a few times this month. They liked to block the road from the Lodge to the Staff Village making it a bit difficult to be on time for work. We call this our “traffic jam”. A few Zebra kept close to the lodge. Apparently the helipad is used these days as a sitting area. A beautiful male Kudu could also been seen around the lodge area for a few days. 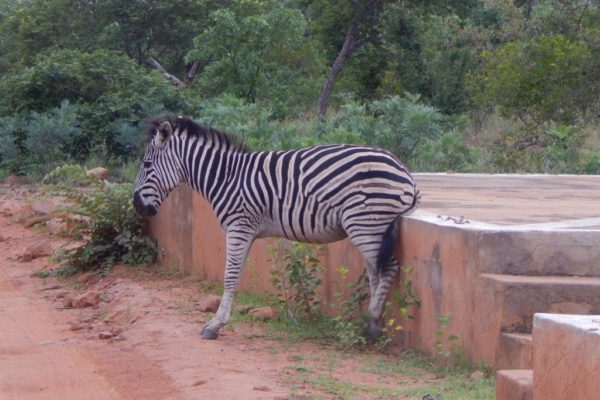 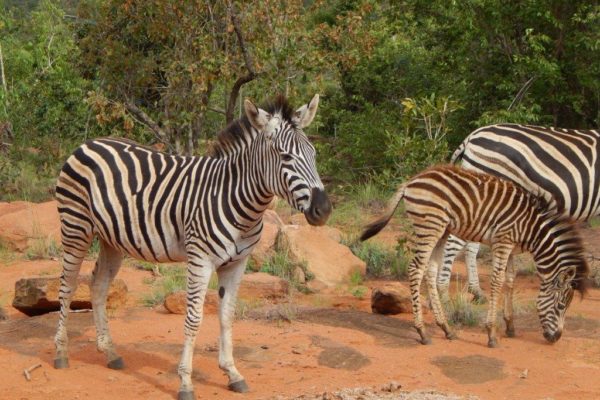 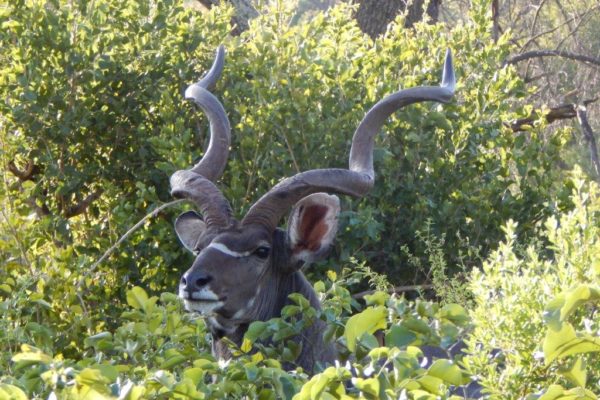 Welgevonden offloaded 80 Springboks in the South. It is a very unusual sighting for us. Springbok has reddish-brown hairs on the back, white hairs on the lateral sides of the body and belly and dark brown horizontal line in the middle. It has white face and two brown lines that stretch from the eyes to the corner of the mouth.

We do have a new member that joined the Hippo family. Baby Hippo does like to hide between his parents. Female hippos, called cows, give birth every two years, usually to a single calf. Soon after birth, the mother and her baby join up with other cows and calves for protection against predators, such as crocodiles, lions and hyenas. 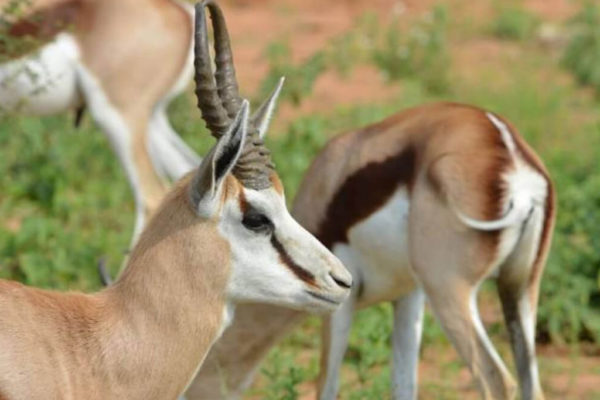 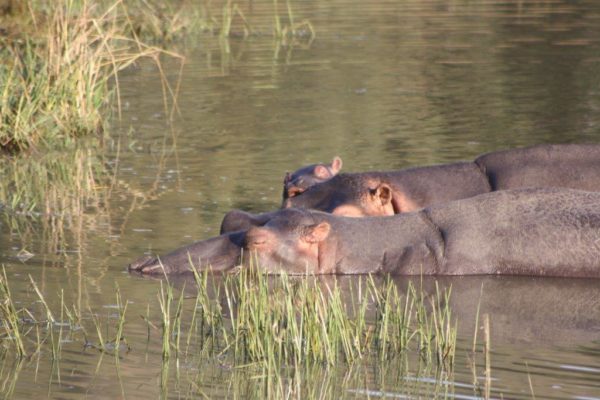 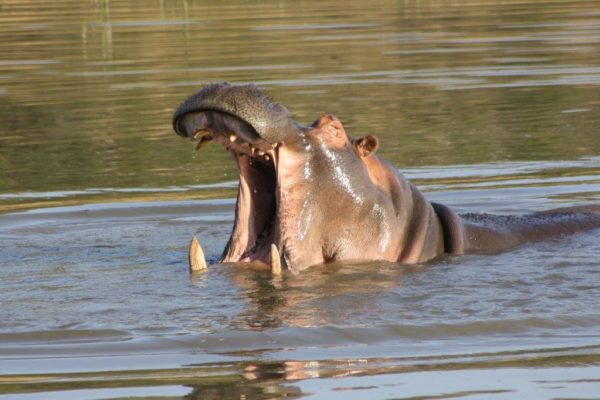 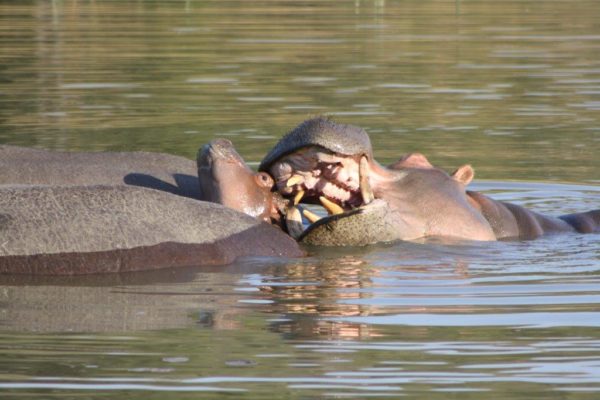 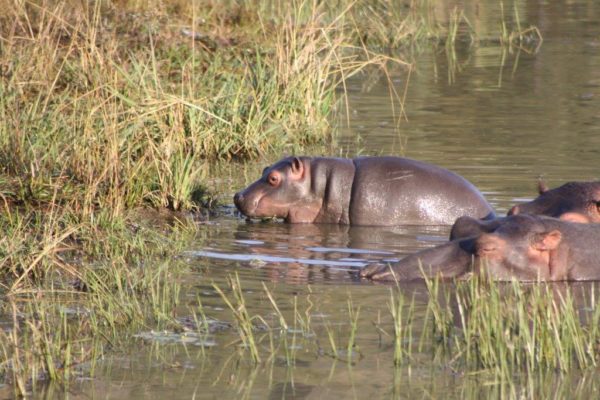 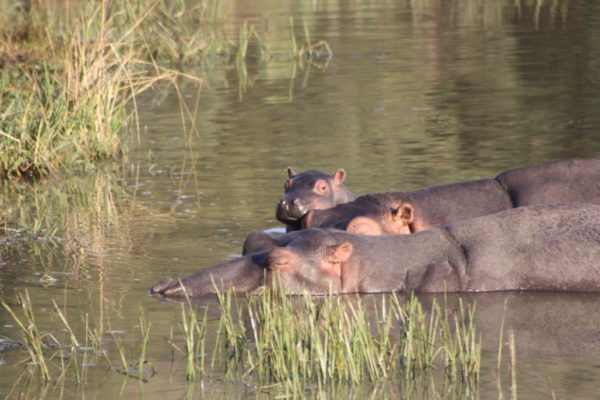 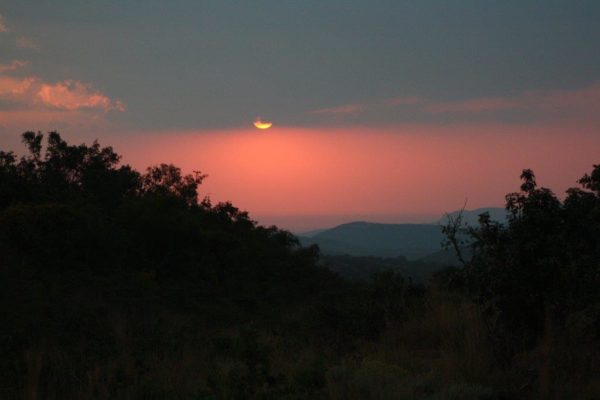 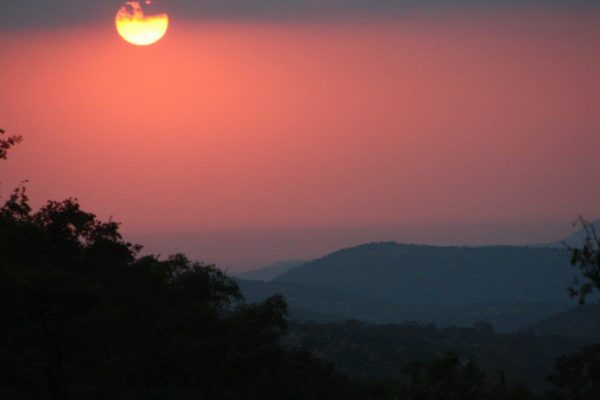 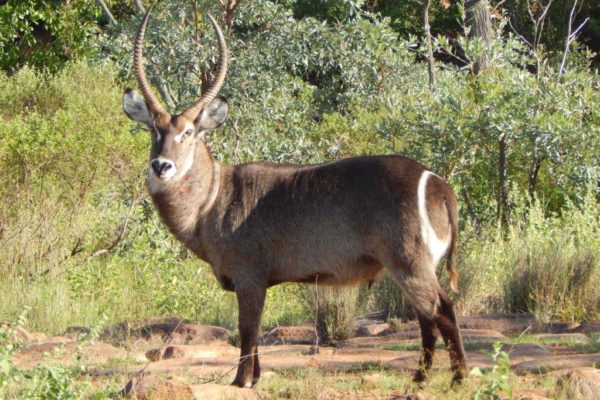